Volksbühne Berlin: How the workers’ stage became an avant-garde theatre

Volksbühne Berlin: How the workers’ stage became an avant-garde theatre

Located at Rosa-Luxemburg-Platz, Berlin’s Volksbühne is a must-see for any theatre lover. Since its opening on 30 December 1914, some of Germany’s most interesting productions have premiered here. Big names, such as Erwin Piscator, Benno Besson and Frank Castorf made history in this very building. Here, you can learn more about the eventful history of the theatre, its legendary directors and the current highlights of Volksbühne’s programme. 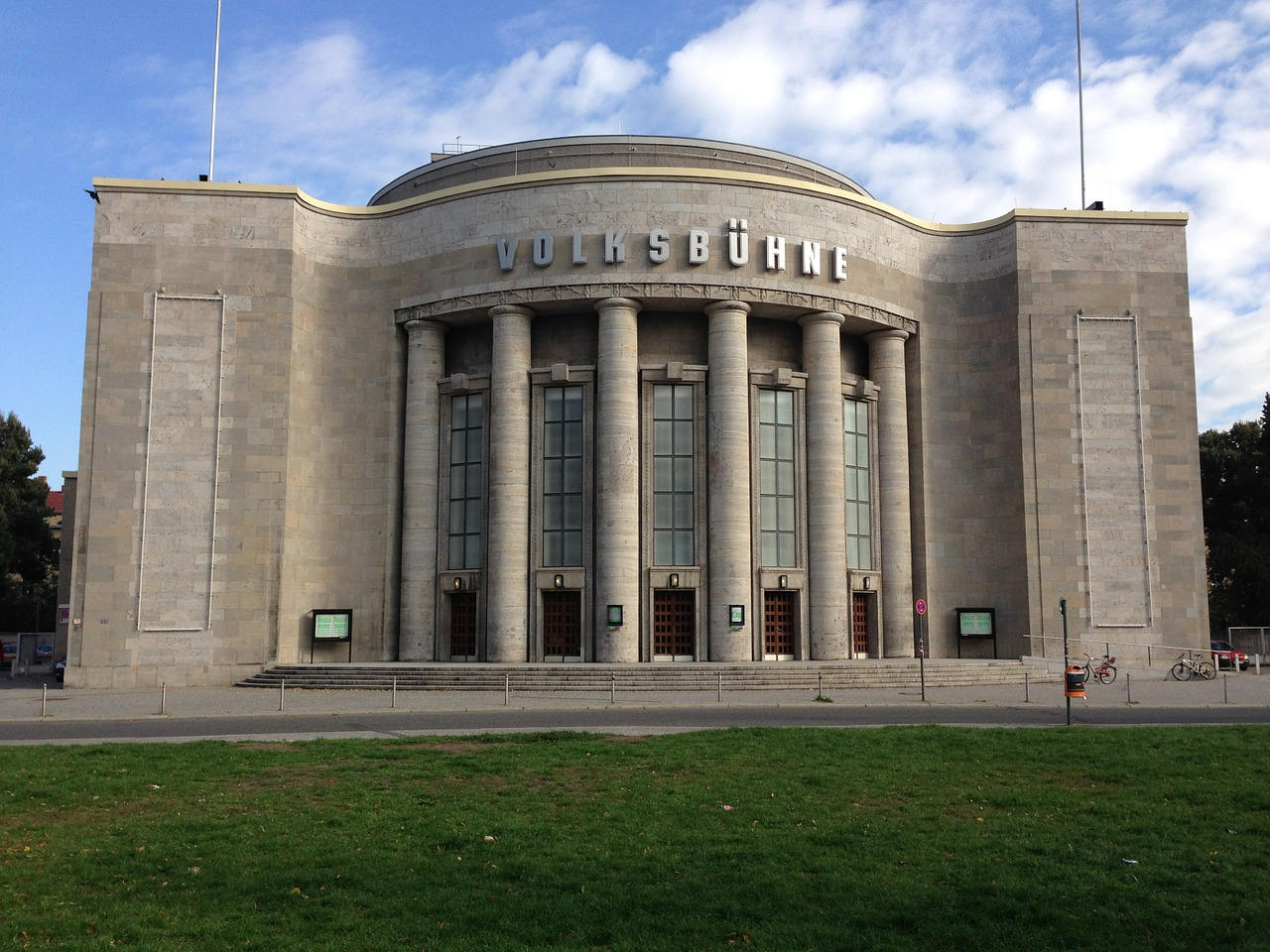 “Art for the people”

The foundations of Berlin Volksbühne date back to the “People’s Theatre Movement” of the late 19th century. Inspired by social democratic ideas, it was considered important that workers could afford visiting the theatre. Therefore, workers paid for the construction costs with donations.This also had the advantage that it gave the Volksbühne independent status, which meant the theatre was less affected by state censorship.

The construction of Berlin’s Volksbühne was completed in record time. Only 16 months passed from groundbreaking in September 1913 to the opening in December 1914 – this is especially impressive when considering that the First World War had begun in the same time. The project was led by a renowned architect, Oskar Kaufmann. With curved ceilings, shell-limestone facades and six enormous round pillars, Kaufmann created a striking landmark for modern Berlin. The ideals behind Volksbühne are reflected by the pillar inscriptions stating “art for the people.”

The premiere was not quite as smooth as the building process. As the revolving stage failed to move, the planned performance of Goethe’s “Götz von Berlichingen” had to be cancelled at short notice. Instead, the ensemble performed the comedy, “When the Young Wine Blossoms” With this light comedy from the Norwegian writer, Björnstjerne Björnson, the opening fell somewhat short of the theatre’s high artistic standards. However, this would soon change in the years to follow.

The famous directors of Berlin’s Volksbühne

The special place Volksbühne holds amongst the theatres of Berlin is very much attributable to its directors. From 1924-1927, the legendary Erwin Piscator laid the groundwork for Volksbühne as a progressive, experimental theatre. The politics of his theatre were in line with the spirit of the time, but still made headlines regularly. With his stage projections and use of cinematic tools, he paved the way for theatre epics like the works of Bertolt Brecht. However, the world premiere of Ehm Welk’s “Gewitter über Gottland” caused a scandal. The social revolutionary interpretation by Piscator was too extreme for the Volksbühne’s executive committee, and the artistic director left the theatre in a storm of controversy.

Berlin’s Volksbühne even enjoyed great artistic influence during the GDR period, especially in the years led by Swiss director Benno Besson. The Volksbühne’s theatre festivals were well-known, with the actors performing both on the stage and in the foyer, as well as in the courtyard. By giving young directors like Manfred Karge and Matthias Langhoff a platform, the ensemble benefitted from these fresh creative spirits.

More recently, Frank Castorf’s era is worth a mention, especially for its influence on how Volksbühne has been perceived post-reunification. In his very first year as director, Volksbühne was awarded “Theatre of the Year” – but Castorf didn’t rest on these laurels. His post-dramatic theatrical style has been characterised by video cameras and screens. Using dissociative tools like absurdism, slapstick and smut, Castorf did not shy away from the experimental aesthetics that have made him a cult figure amongst younger theatregoers. His six to eight hour long Faustian productions, which only let viewers leave early in the morning are particularly unforgettable.

2017 saw the highly controversial decision to replace Castorf with the Belgian theatre consultant Chris Dercon. A large section of the ensemble, as well as many other Berlin-based directors, feared an uprooting of the Volksbühne’s ideology and spoke out against the change. In fact, Chris Dercon stayed only for a few months before being replaced by stand-in director Klaus Dörr who will lead Volksbühne until the end of the 2020/21 season. Potential successors are currently a hot topic in Berlin’s cultural scene.

Volksbühne sets itself apart from the other Berlin theatres with its diverse and genre-spanning repertoire. In addition to classical drama, performance art at the highest level is also on the programme. This ranges from avant-garde experimental dance pieces like “Massacre” by the Swiss choreographer Alexandra Bachzetsis to the reunion of legendary New York industrial pioneers, “The Swans” and their sound collages. Visual arts are also offered a stage in the Volksbühne, for example Paul and Damon McCarthy resurrected the excess of the 1950’s Hollywood Hills scene with their video installation, “Rebel Dabble Babble Berlin.” The diverse programme of the Volksbühne is rounded off by special concert and literary events. At the moment, the 2019 season has a strong literary vein. This includes the ensemble’s dramatisation of David Foster Wallace’s epic, “Infinite Jest,” as well as numerous readings held in the Red Salon. Even so, classic drama hasn’t been neglected, with Frank Wedekind’s “Lulu” and Henrik Ibsen’s “An Enemy of the People” both taking the stage this season.

The recipe for Volksbühne’s success? It offers art that that really moves people and lures them from their comfort zones. The ensemble doesn’t shy away from exploring boundaries and trying new things. This joy in experimentation has been at the heart of the theatre from its early days as a workers’ theatre and this still continues today. If you want to experience the unique charms of Volksbühne, you only need to take a short stroll from GLINT’s doorstep. Dive into Berlin’s lively theatre scene!