Gendarmenmarkt – Berlin from its best angle

Gendarmenmarkt – Berlin from its best angle

If you are looking for places rich in history and culture in Berlin, you will arrive at Gendarmenmarkt sooner or later. Thanks to its magnificent architecture and its importance in public life, this spot has a unique value amongst Berlin attractions. Between Französische Strasse on the northern side and Mohrenstrasse in the south, this area was the centre of the historical Friedrichstadt district. Today, it is the pride of Berlin-Mitte.

Quite a few popular events take place here, including the renowned Classic Open Air concert or the Gendarmenmarkt Christmas Markets. However, in everyday life, it is the place to stroll, relax and dream. Countless nearby shops and restaurants offer all of the benefits of inner city life. In this article, you’ll find out more on the eventful history of Berlin’s Gendarmenmarkt and discover which sights and events just can’t be missed.

The history of the Gendarmenmarkt

The Prussian King Frederick I commissioned the construction of the Gendarmenmarkt in 1688, based on designs from Johann Arnold Nering. The square soon became a popular place for Huguenots – Protestant immigrants fleeing persecution in their native France. As a result of the Edict of Potsdam, they were able to settle safely in Prussia and remain free to practise their faith.

On the northern side of the square, the newcomers constructed a church, known today as the French Cathedral. The local Lutheran community gathered in the church on the opposite side, now known as the Deutscher Dom (German Cathedral). The magnificent concert hall located between the two was built at the beginning of the 19th century based on designs of the famous architect Karl Friedrich Schinkel. It was also used as a theatre for a long time.

Gendarmenmarkt has an equally eventful story in Berlin’s more recent history. It had suffered severe damage during World War II. Only in 1976 did East Berlin make efforts to restore this location to its former glory. In the GDR, the Gendarmenmarkt was known as “Platz der Akademie”, after the Academy of the Arts located within the Konzerthaus. The last official act of the GDR was to stage Beethoven’s 9th Symphony on the eve of German reunification in 1990. 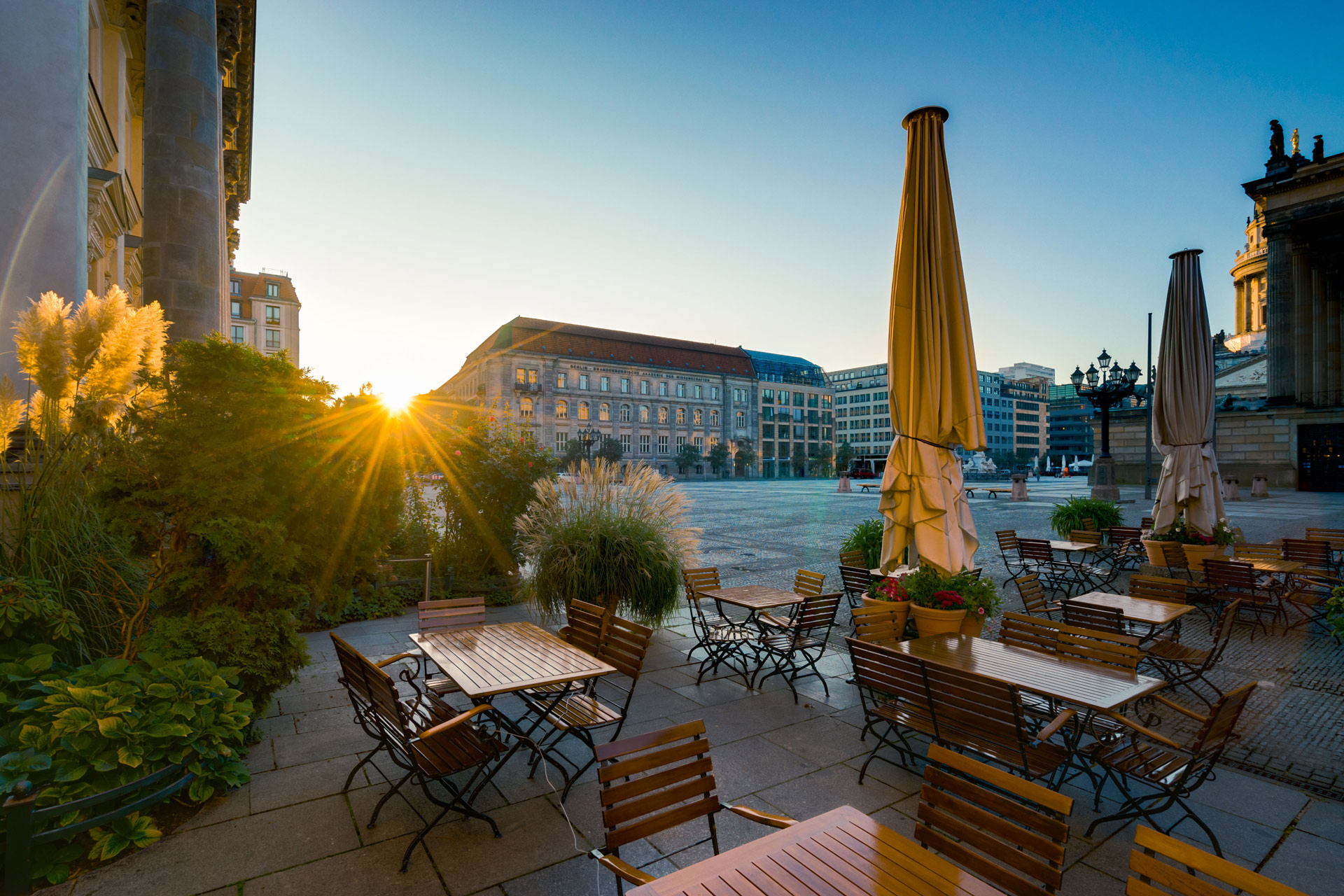 Events and attractions at Gendarmenmarkt

Berlin’s Gendarmenmarkt has many interesting aspects and is often the home to exciting events. Here you’ll learn which sights and festivals you simply must see.

A visit to Gendarmenmarkt is not complete without taking in the French Cathedral, or Französischer Dom. The imposing domed towers of the French and German Cathedrals were first erected under Friedrich II in order to reflect the rising Prussian influence. It is believed that the Prussian king took inspiration from Rome’s Piazza del Popolo, which features similar twin structures. In any case, the climb to the 40 metre high observation deck of the French Cathedral is worthwhile and offers a stunning view over the whole of Berlin-Mitte. On the ground floor of the French Cathedral, you will still find the French Friedrichstadt Church, which is still used as a place of worship by the French-Reformed Huguenot community in Berlin.

The German Cathedral, or Deutscher Dom, is no less impressive and has been home to the permanent exhibition Milestones, Setbacks and Sidetracks since 2002. Over five levels, you can learn about the development of parliamentary democracy in Germany. The exhibition, which has already been visited by around 7 million people, acts as an extension of the well-known exhibit Questioning History, which was originally on display in the Reichstag since 1971 and moved to the German Cathedral in 1996.

To see some of the best events and performances, you must visit the Konzerthaus, a concert hall also known by its former name Schauspielhaus. Here, you can often enjoy of Beethoven classics performances by the renowned Berlin Konzerthaus Orchestra in the main theatre. The smaller theatre is home to high-calibre chamber music performances, including Jean Françaix’s Bläserquintett Nr. 1. A number of famous musicians from the international jazz scene are also regular guests and perform at events, such as the Rush Hour series, which is held every Thursday in the Music Club. This diversity ensures the concert hall remains one of the most interesting places in Berlin.

If you simply can’t get enough of music, then you definitely can’t miss the Class Open Air concert at Gendarmenmarkt. Every summer, the concert hall’s long staircase transforms into a wonderful stage. You can relax in comfortable seats and watch the sun going down below the horizon, all while beautiful music fills the air. Over the course of five evenings, the renowned orchestra present a colourful mix of classical music, opera and pop. Performances aren’t limited to the serene – even the legendary funk/soul band Earth, Wind & Fire have played here and wowed the audience with their vibrant stage presence.

Even in winter, there is no room for boredom at Gendarmenmarkt. During Advent, it features the atmospheric Magic Christmas Market. Rows of seasonally decorated wooden huts present traditional handicrafts from across Germany. Moreover, you and your loved ones can enjoy tasty Christmas specialities from a number of food stands. The changing program of Christmas bands, dance performances and theatre productions make for a lively lead up to Christmas. It’s no wonder that residents here rate the Gendarmenmarkt Christmas Market as the most beautiful in Berlin.

Discover the heart of Berlin culture with GLINT

There’s no question about it – the Gendarmenmarkt is one of the most interesting places in Berlin and one of the most popular attractions. This explains why millions of tourists come from all over the world each year, all to experience this magnificent place and to attend one of its many exciting events. As a resident of GLINT, you’ll enjoy this variety right on your doorstep. In just a few minutes you will find yourself in the middle of Gendarmenmarkt and can discover this place for yourself. Experience the heart of this city as soon as you can.

Would you like to find out more recommendations for Berlin-Mitte? Then download our free guide “Living in Berlin-Mitte” now!